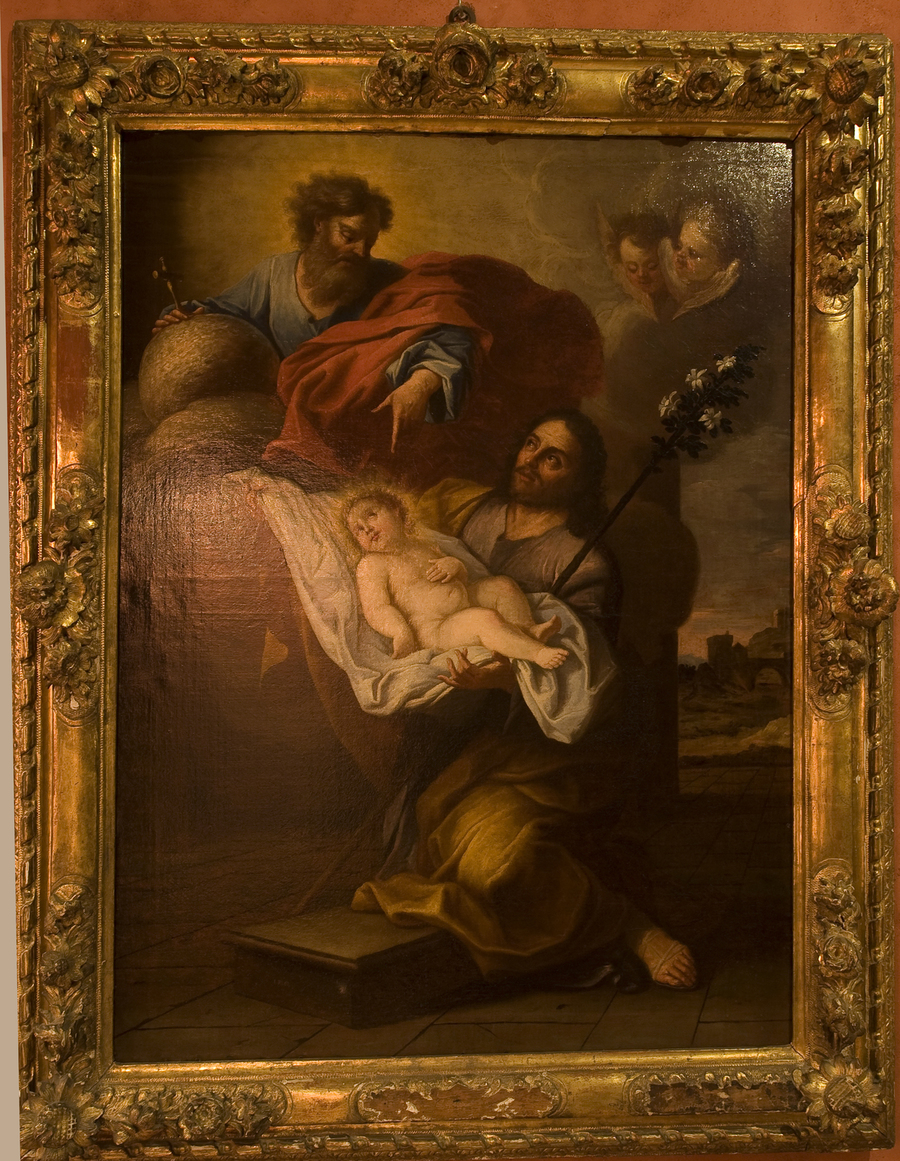 In the Roussillon of the great century there were two painters : one went up to Paris to Louis XIV and became Hyacinthe Rigaud, the other went to Phillipe V, in Madrid and became Antoine Guerra.


This painting, bought in 1996 by the municipality of Prades, comes from the Jesuit’s Convent of Perpignan. Repeating an iconography dear to Roussillon : the double fatherhood. Guerra already used this subject in two paintings : “The Glory of St Joseph” (1696) and “St Joseph and the Trinity” (1697). (See exhibition catalog of the General Council “Guerra, Baroque painting in Catalan country in the 17th and 18th centuries” by Julien Lugand).


This iconography is rare : St Joseph, with his flowered staff, presents the child Jesus. Above him, God the Father, puts his right hand on a transparent globe representing the universe. With his left hand, he points to the child and claims his paternity. Here is a somewhat unusual Trinity : father, son and St Joseph. In the upper right corner, two angels seem to be commenting the scene.


It’s a baroque painting, dating from 1708. For some time, the hypothesis of an infinite universe that has lost its center has been developed. Renaissance geometry has been abandoned with its horizontal vanishing point, and a unity is attempted to be reconstructed from a higher point of view. We imagine a cone-shaped world, with a material base and a spiritual summit. The Church brings together the spiritual and the temporal. The philosophy : continuity and individuality. Art constructs its space differently ; we go from painting to sculpture and architecture, without a solution of continuity. In the field of stylistic devices, Baroque art uses allegories and symbols with a preference for allegory in its stagings.


Guerra’s present painting is a good example of this : let’s consider for a moment relation of a concept to its object. Here, the concept of purity referring to the object of purity : the procreation of the Child Jesus. We are dealing with an allegory : it’s a subject of painting whose title could be "the paternity claimed and paternity assumed", despite, by the renunciation and we see what that “despite” can bring as clarification to the existential strategy of the religious who lead a life of renunciation and action.


And now some simple tips to make a baroque painting diagnosis.

There is a change with Renaissance space, we pass roughly from a cubic and spherical space to a helical and ovoid space.
Texture is more important than structure.
Clothing releases its folds from their subordination to bodily attitudes. The autonomous folds follow their own course and they’re always multipliable (folds, surplices).